Kilimanjaro; Don’t stop, never give up, hold your head high and reach the top

Summit night had arrived and we were all nervous and worried about the challenge that awaited us. The porters woke us up at midnight (2 hours behind schedule due to our tiredness from the earlier trekking) and we sat in the tent drinking tea and eating biscuits preparing.

Wearing about 6 layers, I was ready for the walk. I turned on my iPod and zoned out for the next 9 hours. My water in my camelback froze within an hour, which wasn’t ideal, but I did have spare water. The air was cold, and we only had our head torches for light – which in a way was good as it meant we couldn’t see just how far we had to go.

Altitude sickness kicked in a couple of hours after we started, but I can’t be sure that that it was it was. I felt sick, had a headache and generally quite wobbly, but that could have just been me over-exhorting myself exercise wise and the general lack of sleep.

The porters were incredible they did everything for you, from giving you drinks to dragging you up the mountain. I was ok(ish) compared to other people that were on the mountain at the same time, and managed to drag myself up to Stella Point, this was the hardest bit to get to as the scree and rubble meant that you would take two steps forwards and slide a step back. It was exhausting, a steep hill, the scree and the altitude and lack of oxygen in the air meant I had to sit on a rock to rest every few metres. It really was a struggle, and everyone says it, but it was the hardest thing I have ever had to endure.

At Stella Point you can see the sign for the Uhuru peak, I decided to go on, but others stayed at Stella Point. The distance doesn’t look very far and at sea level would probably only take you a few minutes to walk, yet the altitude meant slow walking and rest stops.

I managed it, I managed to get to Uhuru peak! The rooftop of Africa and the highest point of Mount Kilimanjaro – we took pictures to remember and prove that we got there before attempting to descend from the summit. 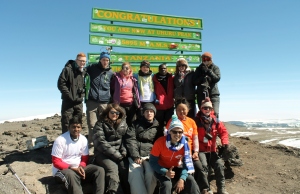 Summit night now feels like a blur, I don’t really remember getting up to Uhuru peak, but I’ve had the best time climbing Kilimanjaro and am so amazed that I was actually able to manage to get to the top.

Posted by NatalieHarriett in Kilimanjaro

Where To Find Me